e were out on our walk through the fields this morning when we turned a corner near some bushes and saw something sitting there with big ears that stuck up and out, even bigger than my handsome German Shepherd Dog ears.  I never seen anything like that before and thought it was called a Rabbit, but Pam said it was a Hair.  Funny name that, all these animals in the fields have funny names, like those Dear we saw a while ago.

Pam had just let me off the lead and so I rushed over to say hello and introduce myself, she’s always telling us to be friendly to other animals, so I knew she’d be pleased, but the Hair wanted to play the chase game and leapt off into the field of that stuff called Maze.  I’m always up for a game of chase so I took off after him and followed his bouncy bottom for a while, in fact it was bobbing up and down so much I thought he might be a girl.  He had very long legs for such a small animal and bounced away very quickly through all those stalks.  I was having a bit of trouble getting through because the stalks were quite close together and I was much bigger than him, I couldn’t see any path to follow and  quickly found out why it’s called Maze, it’s really dark and confusing inside.  Then when the Hair disappeared and started playing hide and seek I shouted that I ga

ve up because my nose just couldn’t find him, but he wouldn’t come out of hiding to chat to me.  I hung around for a while but he still didn’t come out, pity, I so much wanted to chat to him and get a better look at those ears.  So I listened for Pam to see if she was calling to let me know where she was, and yes, I could just about hear her, but she did sound a long way away, so I started off in the direction of her voice.

Eventually I got out of the Maze, seemed to take ages bashing through all those tall stalks, and I looked around for Pam.  I couldn’t see her, but then I spied her in the distance, waving her arms so that I could see her better.  So I set off towards her, she really is very good at letting me know where she is, but she was 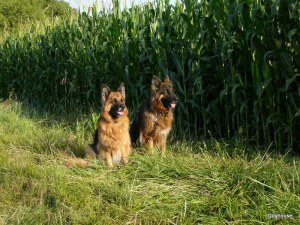 a long way away and I was feeling quite tired by the time I reached her.  I could tell she was pleased to see me but she didn’t stop walking, and you know, I’m a very perceptive dog, I detected she wasn’t happy about something. I wonder what it was? I expect it was Roma, she often does things to upset Pam when I’m not  there.

Pam carried on walking, muttering something about the lead, but I wasn’t really listening because I was keeping an eye open for the Hair and then Roma whispered to me that Pam wasn’t happy and I must be good for the rest of the walk.  What on earth did she mean??  I’m always good!  So I asked her what she’d done to upset Pam while I was playing with the Hair and she gave me a funny look, said it wasn’t her, she never goes far away and always comes when she’s called, then  she stuck her nose in the air and refused to say any more!  What is it with these girls?  I never know what I’ve done to upset them!

Sometimes it’s so difficult being such a handsome, male beast …… but hey ho, c’est la vie ….