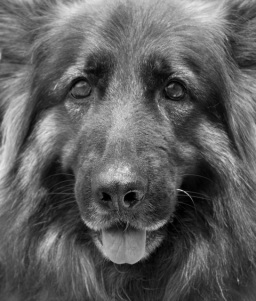 Pam’s taken me to see the vet again and I wasn’t ill, not even slightly ill, I’m still a handsome, fit and healthy beast, so it’s really not fair to have to go to the clinic to have a needle.  Pam’s excuse was that it was for my passport, and yes, I do have one, I’m very proud of it, it’s from the European Union and it’s blue!

As I’m sure you all know, I’m a very well travelled dog, I’ve been in aeroplanes and visited different co 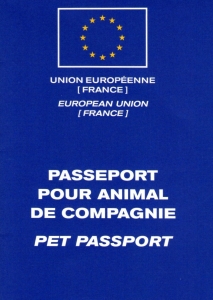 untries and of course, dogs that travel have to have a passport.  I’ve been talking about it to Roma  who knows about these things and she says that unlike people, we have to get injected for our passport.  It’s for “le rage”, which for those of you who are not bi-lingual like me, means Rabies, and even if we have enough of “le rage” anti-bodies in our blood not to need an injection, they still have to stick the needle in anyway.  I don’t really understand that and if I had any anti’s or other bodies in my blood, I think I would know about it!!!

Roma also says that if dogs don’t get the needle every year for the passport then the passport expires and that means even more needles afterwards because there are tests that have to be done to get it back……. us dogs just can’t win.  I do wonder how Roma knows all this ….. oh, she says she listens to Pam, more comments about my ears, how many times do I have to say there is NOTHING wrong with them, I can hear perfectly well, I just haven’t heard Pam talking about Pet Passports.

I know that Pam doesn’t have to have needles to get her passport, or before she travels, even though people can get “le rage” as well as dogs.  In fact Pam is very strict these days and would never let us catch anything bad and she always makes sure we are fit, handsome and healthy.   There are even times when she’s travelled and has not been very well, but she still doesn’t need tests or a needle to get her passport and her passport doesn’t expire after a year.  I don’t know who makes these silly rules but they obviously don’t like dogs!!!!  I think it’s called discrimination, or perhaps the rules are made by the company that makes all those needles!  I expect that’s it.

Anyway, we were at the clinic and I barked at all the other dogs there to show them that I wasn’t frightened and when my favourite vet said hello to me I licked his nose to show that I was friendly, so he told me I was very handsome and courageous.  Nice that he appreciates a good, handsome, dog when he sees one.  Then they told me to jump on the table, so I got on and immediately tried my leaping off strategy, but unfortunately this time it didn’t work as Pam was hanging onto me to make sure I couldn’t leave.  I was so busy trying to work out how to get off the table I’m not sure he managed to get the needle in, but I saw him writing in my passport so I think he must have done, they only write in the passport when they’ve done the needle.  Well, at least that’s over for another year and it didn’t hurt, although I still HATE those needles.

Hey ho, it’s not easy being a dog and I hope Pam takes me travelling soon so that all those needles and passport don’t go to waste.

One thought on “Pet Passport”