I’ve been to visit the vet again, I’m not ill so I don’t know why Pam thought we should go.  As you can imagine I wasn’t very happy to discover we were going to the clinic yet again, however everybody was very kind to me and people sitting in the waiting room kept on complimenting me on my good looks.  Well of course they’re right, I am a very HANDSOME BEAST!

It was my favourite vet and he always chats and talks to me and he was explaining to another man in the room that I’m a famous dog and I write a blog.  Don’t know who the man was but I bet he’d never met such a famous dog before and I could see he was very impressed and he also told me I was very handsome.  So I had to get on the table as usual and Pam was going on and on that I’ve started limping on my front leg.  Well I don’t know about 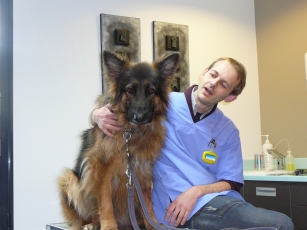 that, but I do sometimes get a twinge in my shoulder, however I’m not worried about it and I don’t know why she’s making such a fuss.  So the vet moved my head and legs around a bit and after that he lowered the table and I was very relieved to get off without having the needle.  I shot off out of the door towards the car, but Pam and the vet had other ideas and I wasn’t pleased to discover we were going into another room.

I’d never been in that room before, no windows, just some machinery but it did smell rather interesting.  The vet lifted me up onto the table, it was different to the other one and I was becoming very suspicious, especially when he wanted me to lie on my side and I straightaway decided I wasn’t going to do anything dangerous.  But then Pam said that I needed to lie still because they were going to take a photograph of me, or of my insides to be precise.  Well, why didn’t she say that before??? I

love posing for the camera and having my picture taken.  So I lay there quietly while the vet did something with a big camera that was positioned over the table, must be a really special picture to need such a big camera and a special table.  Then I realised,  I’m so handsome they’re even taking photos of my insides!!!   Can you believe it!

So he took the photo, which was in black and white, pity, I would have preferred colour, and then we all looked at it on the TV screen.  They were admiring it and pointing at it, so it was obviously a good photo, but it was getting a bit boring and I was hoping they would take another in a different position, but they didn’t, and we didn’t even get a copy of that one.  I hope Pam asks for a copy next time and it definitely wasn’t as much fun as when I do a photo shoot with my pal the Graphic Designer.

Roma says  she doesn’t know why I’m so excited, the photograph is called a Radio, what she really means is Radiographie, or for those of you who can’t speak French, it’s an X-Ray.  I don’t know how she knows these things, but I expect she’s just jealous because no-one has ever wanted to photograph her insides.  I just can’t wait to tell Bertie and Hector, I bet they’ve never had a photo taken of their insides either!

Uh-oh Pam’s coming to do some of that hot hands healing stuff with me, must have been a really good photo, I better go, I’ll be all relaxed and sleepy afterwards.

Hey ho, it’s a great life being such a handsome beast inside and out!!!