We’ve had an interesting time just lately, Pam’s been and done it again, we’ve got another cat!!!  Well actually it’s one of those baby cats called a kitten and it’s tiny, when me an Roma saw what Pam had brought in we thought YIKES!!! NOT ANOTHER!!!  Apparently she found this one in the street, just like she found Jazz, and there are 3 more out there – I think these lost animals know to come to our street to find Pam  …..  Anyway there was this tiny ball of fur, in our kitchen, walking on tip-toe, hissin an spittin at everything that moved and everything that didn’t.  Of course me an Roma, we’re big, sensible German Shepherd Dogs and we’re dead cool with cats, all that fuss just makes us laugh, such a performance and for what?

I don’t think the cats are laughing though, Jazz and Calypso are not happy, Jazz said “oh no, not anozzer, why did she bring zat zing into ze ouse?” Jazz has a very weird French accent these days be 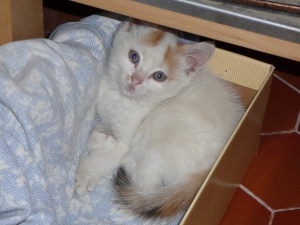 cause he’s a French cat and down here in the south they speak funny.   Anyway they wanted to be friendly but then the little thing started hissin and spittin at them and so they ran away, big brave cats frightened by such a tiny little thing!  Now the kitten wants to be friendly but Jazz and Calpyso are still frightened and running away and it’s them doing all the hissin, spittin and growling.  I don’t think I’ll ever understand cats and it’s all such a fuss about nothing.

Pam’s been going on and on about whether it’s a boy or a girl and she’s finally decided it’s a girl and called her Aria.  She was very noisy when she first came, though luckily for us she isn’t singing much now because it’s a truly awful ear splitting experience, cats just can’t sing properly, beats me how Pam gets such a good sound from her violin strings….  oh, Roma says they’re not made of cat gut, well then that explains it!  Simple!  Have to say none of us have much confidence in Pam’s decision that she’s a girl, she thought that Jazz was a girl and look how wrong she was with that, so we might all discover lat 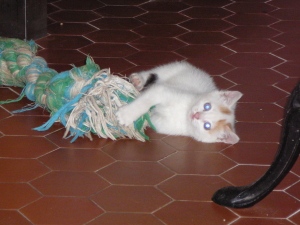 er that Aria’s a boy ….  I’m glad it’s a musical name, but she really can’t sing, not like me with my beautiful singing voice.  Roma’s giving me one of her funny looks, what did I say?

Aria seems to be quite happy with us and does all that silly cat stuff trying to climb on everything and leaping and dashing around the house.  She sits with me an Roma on the balcony in the evenings and tries to play with Roma’s tail, but Roma HATES anyone playing with her tail and gets very grumpy with her when she does that.  She also plays with our things, but hey, we’re cool with that, we don’t mind sharing the tug rope.  Pity Jazz and Calypso can’t be cool, but I think they soon will as Pam’s doing all that hot hands calming stuff and also putting lots of those flower essence things in our water bowls, so I expect everything will be alright soon.  Well, I do hope so, cos me an Roma are getting a bit tired of all the fuss!

Oh, I nearly forgot to say, Pam’s getting very worried about the 3 kittens left outside, I’ve heard her on the phone, all of the rescues locally are full and if anyone would like to take one then they must get in touch with her. 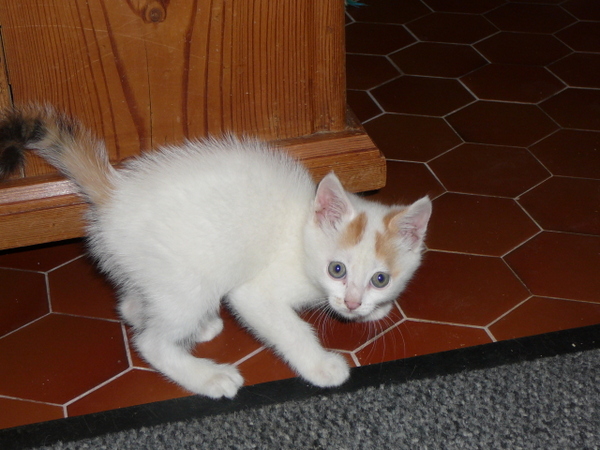