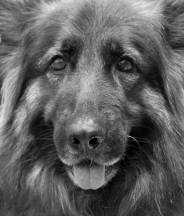 Hello there everyone, it’s been ages since my last blog and I just haven’t been able to get paws to keyboard to tap out another literary masterpiece.  In August we had the canicule, which for those of you who can’t speak French is a heat wave.  I know these important words because I’m a clever bi-lingual dog, and me an Roma were so hot with our lovely thick coats we couldn’t do anything during the day except lie around on the cold floor.

Then the weather got colder and we had people staying with us, so I tried my begging-at-the-table act, gazing longingly at the food they were eating like I hadn’t eaten all week and they gave me pizza to eat, yes, WHAT ABOUT THAT?  It’s a waste of time trying this with Pam as she thinks she knows what us dog

s should eat and never gives us any of her food, but the visitors fell for it and I got to try something different. YEAH, a I’m a Pizza Eating Pup!!!  They even gave some to Roma and Pam didn’t look very happy, but it was very tasty and we’d both like to try it again …….. maybe when the next lot of visitors come ………

me an Roma are so worried about Pam and have decided she’s completely lost it, we think maybe her head got fried in the canicule, and she can’t think proper any more.  It’s the only explanation we can find cos she’s bought in ANOTHER CAT.  Can you believe it ANOTHER CAT – THAT MAKES 4!!!!!!  I know she was very worried about the kittens outside because she was feeding them, however some people came and took two of them away last week.  Pam was so pleased, she said they’d gone to a very good home, but next thing we knew there was this white and stripy small cat in the kitchen with us.

To be fair he’s very polite and not causing any trouble, he does a lotta Purring and doesn’t do any of that hissin and spittin.  He’s called Figaro which is a very musical name from that composer with

the same name as me, and it’s a great name to sing with my fine voice, Figaro, Figaro, Fiiiiiiigaro!!  Such fun, and good to know I can still hit the top notes!!!

Pam says Figaro is Aria’s brother, but Aria says she doesn’t remember a brother and she’s so much bigger than him I think Pam’s probably got it wrong again.  Roma’s giving me one of those funny looks and says Aria’s bigger because she’s been with us since she was tiny and Pam’s been looking after her properly.  Well, OK, so he’s her brother then, but she’s not being very nice to him and all of us are feeling a bit sorry for him having to put up with her jumping on top of him all the time.  It’ll all get better soon as Pam’s put some of those flower essence things in the water to help everything settle down and they usually work.

Hey ho, our house is turning into a real cat house, but never mind, the only thing the cats get to do with Pam is sit on her which can’t be very comfortable and certainly isn’t very interesting, whereas we go out in the car with her and go on lovely, interesting walks and we all have such fun together  …. who’d want to be a cat, dogs have much more fun!