Our cats have gone electronic!!!  Yep all of ‘em and what a lot of fuss and bother it’s been over the last few weeks.

It all started with the cats complaining about another cat coming into the house, and they were getting cross with me an Roma for not doing anything.  WELL, as you know we are very special German Shepherd Dogs and I certainly keep a good watch on the house and don’t allow anything bad in, so I wasn’t happy when they kept telling me off (just who do they think they are?).

They also complained about the smell, well of course I’d smelt it, most unpleasant, cat pee has never been one of my favourite fragrances, but 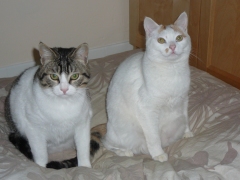 quite frankly, I wonder if it’s got anything to do with Figaro when he tries to go through the cat hole.  These days we call him Figaro the Great, or Fat Fig because all he does is eat and sleep, he’s getting very fat and that cat hole is a real tight fit for him to squeeze through.

Anyway, then Pam started agreeing with the cats and said me an Roma must sleep near the cat hole at night to make sure the other cat doesn’t come in.  WOT OTHER CAT? I have perfectly good eyesight and I’ve never seen it!  So we did as requested because we’re always very obedient but we never saw nothing.  In the morning the cats were very upset saying this fictitious black cat, note that it’s black now, was in the kitchen eating their food during the night and we was asleep, it walked right past my nose.  What rubbish, I can assure you NOTHING came in past my nose, German Shepherd Dogs don’t sleep on the job!!! 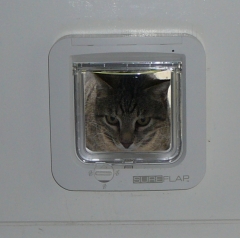 You know, when Pam brings in one of them new kittens the cats all go berserk with the hissin an spittin, but when this fictitious cat comes in they just let it come with no fuss, am I supposed to believe that????

Anyway, Pam, who’s normally quite sensible, has been getting as worked up as the cats, but she’s calmed down now the cats have gone all electronic and have the new hole that works with their puce electronique.  For those of you who can’t speak French that’s an electronic flea which is French for microchip.  I’ve no idea how it works, except that it will apparently keep out this fictitious cat and everybody is now very happy.

I was feeling very relieved that it’s all sorted and pleased that I’m not electronic, but then Roma said us dogs have a puce as well and so we’re electronic too, we had to have it to get here from Africa.  It was quite a shock to hear that and I don’t know whether to believe it. I don’t think us 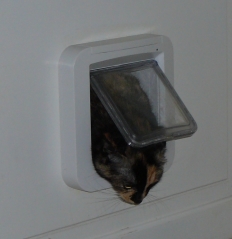 German Shepherd Dogs could possibly have a microchip, we’re too big, it would have to be a macrochip and I don’t know if they make those and anyway, we’re not allowed to have a hole in the door and the cat hole is too small for us, so why would we need one?